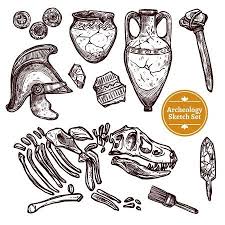 Khansahib: In 1999 incidently a local youths of Village Gurweit were playing at Ashreti ( a dense forest patch behind village Gurwait) . They encounterd with a clay made tile which later was carbon dated and was found 2000 years old tile of Raja Kanishka,s rule in Kashmir .  Raja Kanishka was a ruler and have visited Kashmir during his rule. Surprisingly his foot steps at the site have puzzled all the habitants of the adjoining areas.

I remember the moment when I along with 100 students of Govt. High School Dragger visited the site and have enquired about the development. Luckily an official of the JK Archeological department Who was present at site briefed  and have informed us that the site will be excavated and something more is expected out of the remains. But due to the callous attitude of the State Govt. the site is yet to be excavated. It is perminant to mention that during the digging some clay pipes having length 20 inches and dia of 3 inches were also found and the same pipes were found carrying water from Dobiwon ( low lying area between Doodhpathi and Parihass) . Katareshi a high land Khansahib is filled with claywares and broken earthenwares all across.  The broken pieces are fat as compared to today’s earthen pots. However, their is no concrete historical evidence available about these things at present. Stakeholders seems to be silent as the

things would get  clear if the state Govt will initiate excavation of the site so as few more facts about the ruler will surface.  However, at present the nothing seems to be visible despite 18 years of finding of those tiles. Locals are keen to see if their area was ever been a habitation as their is belief that the entire area happened to be dense forest.

WHO Advises Against Remdesivir For Coronavirus Treatment

Normalcy can never return to J&K if Aug 5 ’19 decisions are not revoked: Dr Farooq Abdullah in Parliament.