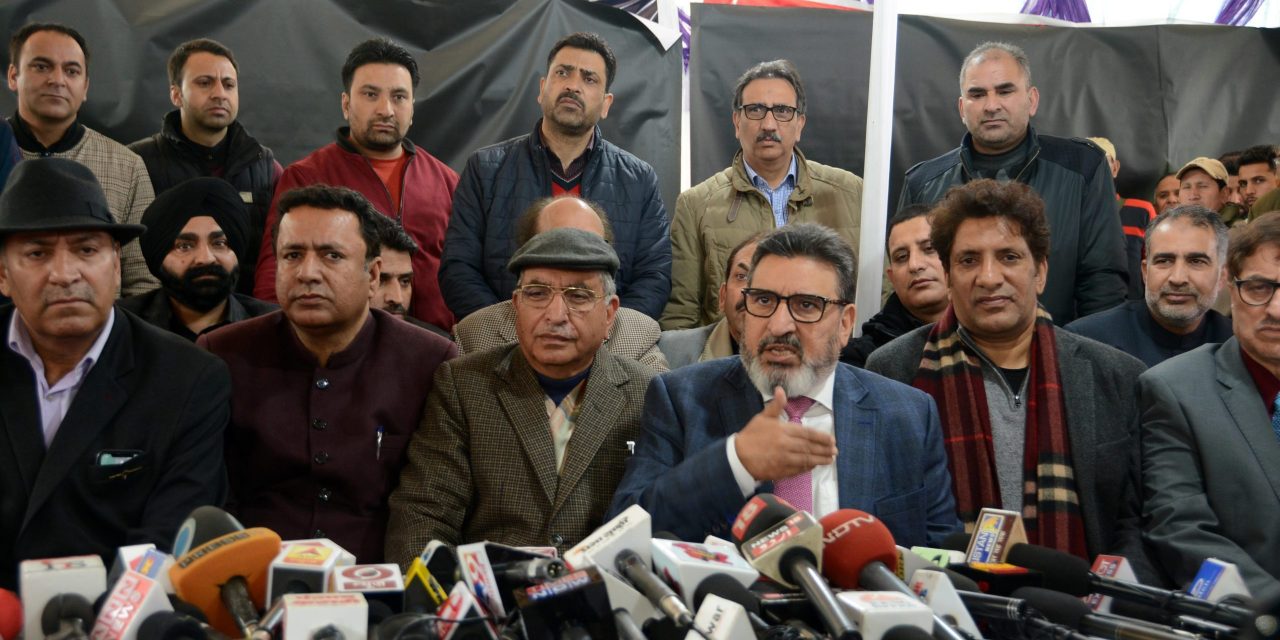 It may be recalled that at the time of announcing the formation of his new outfit early last month with fanfare, Bukhari had vowed to work towards restoring Jammu and Kashmir’s statehood and ensuring domicile rights of people in jobs and education.

As reported earlier soon after his announcement, Bukhari  at the head of a 24-member JKAP delegation separately met Prime Minister Modi and the home minister to flag issues.

The most powerful duo had, as claimed by JKAP, had assured the delegation that the government will take all steps to ensure economic development of the Union Territory, and the genuine concerns over the issues of demographic changes, delimitation exercise and grant of state domicile will be addressed. But earlier this week on Tuesday, the home ministry issued an order that reserved only subordinate posts for the domiciled residents, leaving all other jobs under the union territory, free for all from the country. This obviously raised many an eyebrow, some taking it as “April Fool” as it had come on so called ‘All Fools Day’.

The move triggered protests with National Conference leader Omar Abdullah saying the new rule was an “insult heaped on injury”, referencing the partition of the state and downgrading the state into to two union territories and abrogating Article 370 that provided for its special status.

Bukhari met Shah and Doval on Friday and conveyed his party’s reservations to the new law and reportedly demanded that all jobs should be reserved for residents of Jammu and Kashmir, and also told them that this would deal a big blow to his efforts to help the people to look beyond the Article 370.

The BJP’s Jammu unit had also conveyed to the party high command the growing unrest among the youth over the domicile policy.

Leaders in Jammu told KC that the policy of not reserving jobs for the domiciled person in groups A and B had upset the youth, who felt there was a need to offer some protection to the residents after Article 370 and Article 35A were scrapped following the reorganization of the state in August last year.

“There were concerns that by reserving jobs only in Scale 4, the youth in both the Jammu and Kashmir regions could lose out on employment avenues. In Jammu in particular where job opportunities are limited the youth felt betrayed that post abrogation of Article 370 the union government has failed to keep its promise of ensuring development in the region,” said a senior functionary of the BJP’s Jammu unit.

According to people aware of the developments, as the chorus for the revision of the policy grew, Ram Madhav, BJP general secretary, who has been in-charge of the UT, appraised the party high command including the home minister, of the sentiment on the ground.

“There was a meeting, where Ram Madhav apprised the high command of the resentment brewing among the youth. The government then took a call to take corrective measures even though there was some concern among a section of people over the issue of revising the order,” the functionary said.

When asked for his comment Ram Madhav said, “Government has acted keeping in view the large scale unemployment problem in J&K. In the UT, thanks to decades of mismanagement by successive governments, employment avenues became limited. Once the situation improves, job opportunities will also grow. At the moment government’s decision will help address unemployment problem in Jammu region as well as Kashmir Valley”.

A second party functionary also in Jammu said some leaders in the Rashtriya Swayamsevak Sangh (RSS), the ideological fount of the BJP, were also against reservation in jobs limited only to the domiciled residents. “They felt that by imposing reservation, it would mean a replay of the conditions that existed when Article 35A was in force,” the other functionary said.

The second BJP functionary also said that the government will take a measured view of the domicile issue for the purpose of purchase of land. “Commercialisation of land for real estate purposes will not be allowed; if someone needs land for setting up of industry or for trade and commerce that will be considered.”

On Friday evening, the Centre amended its order, which stated only domiciled residents of J&K will be eligible to apply for recruitment in the union territory.

While the Jammu Unit of BJP felt somewhat satisfied with the amendments, the move came as a proverbial shot in the arm of Bukhari who has now pledged to continue his efforts to get this law revisited in its entirety to remove the remaining loopholes till it satisfies the aspirations of people of Jammu and Kashmir.

“We will continue to struggle till other hostile sections in the law mandatory tenure for non-natives to reside in J&K and cut off dates to qualify for the domicile are not rectified as per the demands of the people of Jammu and Kashmir,” Bukhari said.

He also appealed to all the political parties to rise above the partisan interest and jointly fight for the rights of the people.

“We can have differences with each other on political grounds, but, I think, it is not an appropriate time for mudslinging against each other”, Bukhari said, insisting that restoring the statehood to Jammu and Kashmir is his next big task.

Psychological impactof Covid-19 pandemic and the possible way out