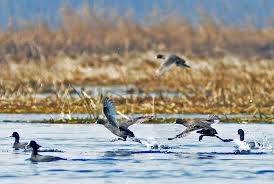 Peoples’ Environmental Council (PEC), a Srinagar based environmental watchdog, has expressed serious concern over the “insensitive” remarks expressed by the newly elected mayor of Srinagar, Junaid Mattu, about wetlands and has reminded the government of the directions issued by the high court and the new set of rules notified by union Ministry of Environment, Forests and Climate Change (MoEF) vis-à-vis protection of wetlands.

In a statement PEC said that its members have taken strong note of the “insensitive remarks” made by the incumbent Mayor wherein he has not only hinted at the government’s catastrophic plans about the future of wetlands in Srinagar city, but has also insulted millions of people (with a sense of environmental protection) through his sarcasm that there was no need of putting a “chastity belt” around Srinagar.

“We will strike a balance between development and ecology but that does not mean putting a chastity belt around the city,” the Mayor had remarked. “Wetland maen keya karna hai? Chedyoun ko dekhna hai? (What are you going to do in wetlands? Watching birds?),” he had further said.

PEC has demanded that the government should issue a clarification on this and should also inform the people about the steps being taken for the conservation of wetlands especially in the light of directions issued in recent months by the high court and the union environment Ministry of Environment, Forests and Climate Change (MoEF) with regard to protection of wetlands.

In August last year, the state high court had directed the government to demarcate the wetlands and take measures to conserve water bodies in the Valley. While demarcation of some of the wetlands has been carried out, but environmentalists have expressed serious concerns about the demarcation and continue to be hopeless about the conservation measures for wetlands.

On September 26 last year, MoEF notified a new set of rules, The Wetlands (Conservation and Management) Rules 2017, which replaced the earlier set of guidelines notified in 2010.

According to the 2017, each state has to set up a State Wetlands Authority that will be headed by the State’s environment minister and include a range of government officials. They will also include one expert each in the fields of wetland ecology, hydrology, fisheries, landscape planning and socioeconomics to be nominated by the state government.

The State authorities will also need to prepare a list of all wetlands of the State or union territory within three months, a list of wetlands to be notified within six months, a comprehensive digital inventory of all wetlands within one year which will be updated every ten years. “However, nothing has happened so far in this direction as regards Jammu & Kashmir,” the PEC statement said and demanded prompt action on this.

The statement also referred to the report of state Assembly’s Committee on Environment which was tabled in assembly on March 27 early this year. According to the report, around 22 wetlands “have so far been converted into residential colonies in and around the Srinagar city during the last 50 years.”